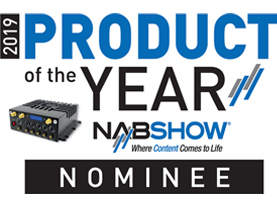 Dream Chip Technologies GmbH (DCT) announced today that the company’s Barracuda Video/Audio IP-Streaming Platform has been nominated for Best New Streaming B to B Technology in the 2019 NAB Show Product of the Year Awards.

The first official awards that recognize innovative new products at NAB Show, the program will recognize the most significant and promising new products and technologies being showcased by exhibitors at the 2019 NAB Show, April 6 – 11 (Exhibits April 8-11) in Las Vegas, NV.

NAB Show Product of the Year Award Winners will be selected by a panel of industry experts in 16 categories and announced at an awards ceremony and cocktail reception at the Westgate Las Vegas Resort on April 10.